You are here: Home / Archives for peace

Justice Jackson stated, “A person gets from a symbol the meaning he puts into it.” What defines a symbol? Webster’s dictionary says, “A symbol is something that stands for or suggests something else by reason of relationship, association, convention; a visible sign of something invisible.”

As we near the celebration of Easter and focus on the message of the cross, can the church be relied upon to stand for truth? Do believers today demonstrate allegiance to the cross? What is allegiance? According to Webster, it is “The obligation of fidelity. It is faithfulness, loyalty, devotion: Adherence to truth or fact; and reliability.” Are we who call ourselves Christians faithfully loyal and wholly devoted to the call of Christ? The cross is our symbol of freedom. There the Lord paid the price for our deliverance, dying so that we might live. Matthew wrote, “Then Jesus said to His disciples ‘If anyone desires to come after Me, let him deny himself, and take up his cross, and follow Me.'” (Matthew 16:24) Jesus also said that it is impossible to serve God and live like the world. “No one can serve two masters; for either he will hate the one and love the other, or else he will be loyal to the one and despise the other. You cannot serve God and money.” (Matthew 6:24)

It seems the pressure of our changing culture has influenced many to relinquish their devotion of adhering to the teachings of the Bible as truth. Jesus addressed this issue of taking Him at His word saying, “If anyone loves Me, he will keep My word, and My Father will love him, and we will come to him and make Our home with him.” (John 14:23) The Lord requires our allegiance. Jesus said, “But why do you call Me ‘Lord, Lord,’ and do not do the things which I say?” (Luke 6:46-49)

The church is the conscience of society. When God’s order is disregarded, it leads to the downward spiral explained by Paul to the church in Rome. “For since the creation of the world His invisible attributes are clearly seen, being understood by the things that are made, even His eternal power and Godhead, so that they are without excuse, because, although they knew God, they did not glorify Him as God, nor were thankful, but became futile in their thoughts, and their foolish hearts were darkened.” (Romans 1:20-21)

Our redemption was purchased with the price of our Savior’s blood and intended to forever end our separation from God. Accepting forgiveness and salvation frees us from the bondage of sin. Through His word, He has empowered us to live free, but it is necessary to submit to His authority to remain free. We are instructed to act as free men and women, “Yet not using your liberty as a cloak for vice, but as servants of God.” (I Peter 2:16) Infidelity to the Lord and His word causes compromise and deception soon follows.

Paul told the church in Galatia, “It is for freedom that Christ has set us free. Stand firm, then, and do not let yourselves be burdened again by a yoke of slavery… You, my brothers and sisters, were called to be free. But do not use your freedom to indulge the flesh; rather serve one another humbly in love.” (Galatians 5:1,13)

The cross is our symbol of freedom and Jesus told us that serving Him and receiving His words of life bring joy and peace. “These things I have spoken to you so that My joy may be in you, and that your joy may be made full.” (John 15:11) In a world filled with turmoil and uncertainty, we can be certain of this:

“That in Me you may have peace. In the world you will have tribulation; but be of good cheer, I have overcome the world.” (John 16:33)

“Repay no one evil for evil. Have regard for good things in the sight of all men. If it is possible, as much as depends on you, live peaceably with all men. Do not be overcome by evil, but overcome evil with good.” ~ Romans 12:17-18, 21

Ever feel like you’ve been run over by a Mack truck? All of us have had the experience of feeling “overcome.” Prayer and perseverance bring peace.

There are times in our lives when we must make sacrifices. Change is not comfortable, or easy, but it is necessary to make the determination to let go. Whatever it may be, simply lay it all down—everything at His feet. Sometimes this can be our relationships, friends, family, our work dreams and aspirations. If we will lay them all at the feet of Jesus, search His word, seek His will and follow His way, we will find ourselves negotiating change. 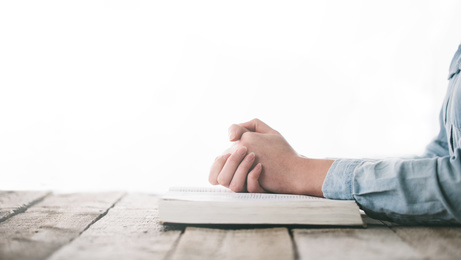 Initially this change may feel painful and it can be lonely, but only temporarily. There are seasons in our lives when for a time we must remove distractions, and be quiet and still in our hearts in order to hear the voice of our Shepherd. We will hear His voice if we listen for it. His answers will come through prayer and His word. By His grace and mercy, rest and peace are promised, and we will come to know that He is God. (Psalm 46:10)

Jesus said, “I have told you all this, so that you may have peace in Me. Here on earth you will have many trials and sorrows. But take heart, because I have overcome the world.” (John 16:33)

Webster defines perseverance as “purpose and a course of action; especially in spite of difficulties, obstacles, and discouragement.” The Apostle Paul encouraged believers in Rome with beautiful timeless words that lift our spirits still today:

Therefore, having been justified by faith, we have peace with God through our Lord Jesus Christ, through whom also we have access by faith into this grace in which we stand, and rejoice in hope of the glory of God. And not only that, but we also glory in tribulations, knowing that tribulation produces perseverance; and perseverance, character; and character, hope. Now hope does not disappoint, because the love of God has been poured out in our hearts by the Holy Spirit who was given to us.” ~ Romans 5:1-5

Hope does not disappoint! Our hope is in the Lord and we take heart in the reality of His great love. The Holy Spirit gives us courage, and in the face of deep distress and sorrow, He is our help and strength. “Have courage and be kind” isn’t just a sweet saying; it is excellent advice and completely possible with the help of our Lord! With God’s presence and truth at work in our hearts, we will overcome and find His peace.

“Now may the God of hope fill you with all joy and peace as you believe in Him, so that you may overflow with hope by the power of the Holy Spirit.” ~ Romans 15:13

There is peace in His presence.

Isn’t it wonderful that when we come to the Lord there is no prerequisite required for salvation? We only need to believe, to come as a child and receive all He is giving. The beauty of the love of God is that we are always accepted. We are never rejected under any circumstance.

Jesus receives us, and embraces us with open arms. “All that the Father gives Me will come to Me, and the one who comes to Me, I will by no means cast out.” (John 6:37) We are always accepted by God. That acceptance means that we are received, we are welcomed, we are adopted and approved of and we are loved. Understanding this amazing love of God gives us confidence, peace and joy. The Lord is not concerned with our family tree. He is not impressed or influenced by our social position, by how we look or our financial status. He loves us just the way we are, and cares too much to leave us that way!

We are accepted and understood by God. He does not misinterpret our actions. He knows our intentions. He does not misjudge our personalities. He knows our hearts, even our very thoughts! (Jeremiah 17:10) This truth should urge us to live for Him wholeheartedly and take comfort from the realization that He knows us and still loves us! “But God demonstrates His own love for us in this: While we were still sinners, Christ died for us.” (Romans 5:8) David urged his son Solomon to “know the God of your father, and serve Him with a loyal heart and with a willing mind; for the Lord searches all hearts and understands all the intent of the thoughts. If you seek Him, He will be found by you.” (I Chronicles 28:9)

When we realize the magnitude of the Father’s love for us, we can be free from loneliness and the fear of rejection. The Lord wants us to live in harmony with Him and be filled with confidence and courage. He will always be with us. “And be sure of this: I am with you always, even to the end of the age.” ( Matthew 28:20) He will always love us and He will always accept us. “The steadfast love of the Lord never ceases. His mercies never come to an end; they are new every morning; great is Your faithfulness.” (Lamentations 3:22-23)

Providence is the Divine Guidance and care of our Heavenly Father. At Provident Ministries we have experienced the provision of God for purposeful living, and His direction for our future. Our hope and prayer is that you will also experience His presence.

"For I know the thoughts that I think toward you, says the Lord, thoughts of peace and not of evil, to give you a future and a hope." Jeremiah 29:11